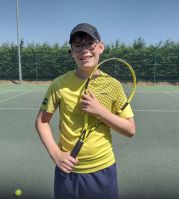 Budding junior player Marc Goodacre represented Horam Tennis Club at the county finals of the 14 and Under Road to Wimbledon competition on Saturday 10th July, playing for a chance to compete against the best players from all over the country at Wimbledon. Marc put in a stirling performance, winning two out of his three matches in the qualifying stage, although this was unfortunately not enough to go further in the competition.

The 14 and Under selection matches had been organised by our head coach Ed at the club in early June, to determine who would go on to the next stage in Worthing. Runner up in the club event was Patrick Lewes.